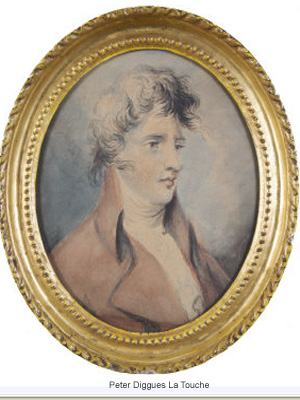 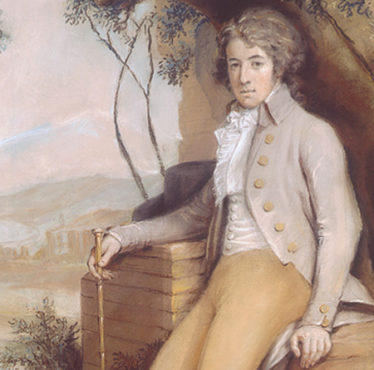 Peter La Touche was known as a generous man. It was he who built the new Christ Church at Delgany in 1789, and who ordered the La Touche monument in memory of his father, sculpted by John Hickey. He was active in many charitable activities in Dublin and Wicklow and was a founder member of the Society for Promoting the Education of the Poor in Ireland. When he died in 1828, at the age of ninety-five, he directed that he should be buried in the new churchyard in Delgany “with as little expense as decency will allow.” An interesting clause in his will directed that whoever should inherit Bellevue in the future would have to reside in Ireland for at least six months each year or forfeit the inheritance.

Peter had no children by either of his marriages, so his nephew, Peter of Marley inherited, but he died two years later. In 1806, he had married Charlotte Maude and the marriage produced fourteen children, of whom only one daughter, Eliza, and three sons, William Robert, Ashley and Octavius, married. His eldest son Peter David now inherited Bellevue. During the famine years, Peter David sat on committees in the area endeavoring to alleviate distress. It was during Peter David’s time also, in 1854-56, that the railway came to Greystones, the station being built where the La Touche adjoined the Whitshed estate.
With the building of Greystones, the La Touche estate became responsible for the laying out of roads, and they donated land and a sum of £1,500 towards the building of St. Patrick’s Church in Greystones.

Peter David died in 1857, and his brother William Robert inherited Bellevue. He remained a director of the La Touche Bank until its closure in 1870. It was William who entertained the Archbishop, Dr. Richard Chenevix Trench at Bellevue when St. Patrick’s Church was consecrated in 1864. Because of various Land Acts between 1870 and 1909, the Bellevue Estate had begun to shrink considerably. In Greystones, many houses were built on La Touche land, so a new Presbyterian Church was required. William Robert gave a free site for the new church, and laid the foundation stone in 1887.

In 1867, William Robert had married Ellen Henn (pictured), but, as there were no children, his brother, Octavius, inherited in 1892, when William Robert died, aged eighty-one.
The new master of Bellevue, Octavius, was a widower with three daughters, Mary, Frances Cecilia and Charlotte, and one son, Peter. Charlotte was a keen and knowledgeable gardener and a great organiser of charitable events in the Delgany area. Her brother, Peter, inherited in 1897. He was a major in the Royal Dublin Fusiliers who was called upon to fight in the Boer War in 1900, and on his return home in 1902 was given a tumultuous welcome all the way from Greystones Station to Delgany. In the same year, he married Sophia Elizabeth Tottenham, but died, intestate, two years later. Bellevue was now divided between his widow and his three sisters. Frances Cecilia and her husband, Dr. Archer, moved into Bellevue.

Bellevue now fell on hard times, and in 1906 Mr. James North, the Auctioneer, conducted a sale of family treasures. The family now tried taking in paying guests, and land was sold to the Holy Faith Sisters to build a school. Dr. Archer was instrumental in helping to build a Golf Club in Delgany, he being elected its first President. However, the Archers finally vacated Bellevue in 1913, and went to live in Malvern in Delgany village. The house fell into decay and was pulled down in the early l950s, and the lands were taken over by the Forestry Division of the Department of Lands.