The La Touche Legacy in Delgany 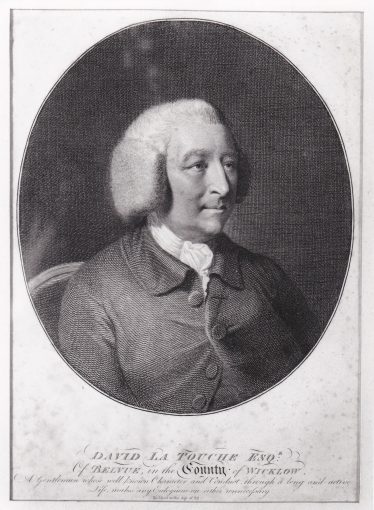 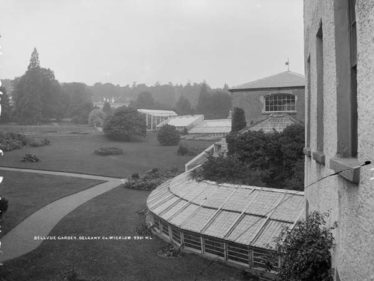 The estate at Ballydonagh comprised 300 acres, with fine views across the Glen of the Downs and towards the Irish Sea. David the Second built his favourite country retreat here between 1754 and 1756, at a cost of £30,000, and called it Bellevue. Beautiful gardens were laid out with winding paths and “extras” built by David and his son, Peter, when he inherited in 1785. Among these was the Octagon, built in 1766, with a panther on springs, which could be made to jump out at unwary visitors. The house was most famous for its huge glasshouse, built between 1783 and 1793, in which many exotic plants were grown. If you want to read more about the gardens click here.

Peter’s sister Elizabeth La Touche founded a school for female children in the grounds of Bellevue, and she supported the children until they were old enough to fend for themselves. She was also the Chief Guardian of the Female Orphan House on the North Circular Road Dublin. It was she who persuaded the aged and infirm Dean Kirwan to preach at the annual Charity Sermon.  In 1766, Peter married Rebecca Vicars and they lived in Merrion Square, but when Rebecca died in 1786, Peter moved to Bellevue. Two years later, he married Rebecca’s cousin, Elizabeth Vicars.

Elizabeth La Touche was famous as a hostess as well as for her charitable works, both in Delgany and in Dublin. She opened an orphanage n in St. Patrick’s Church in 1801.The unfortunate prelate feebly explained to the congregation that he was unable to preach, and promptly fainted. His listeners were so overcome that they donated over £1,100 for the orphans, a huge sum for the time. In 1790, Peter acquired the lands of Upper and Lower Rathdown. It is on these lands that much of modern Greystones is situated. He set about improving the houses and grounds at Bellevue and Luggala, sparing no expense to make these residences the ultimate in grandeur. Luggala was his hunting lodge and holiday home set deep in the Wicklow Mountains. Peter allowed Luggala to be used by “respectable strangers, wherein the spirit of Irish hospitality, beds, and attendants are provided”. This tradition of hospitality at Luggala extends to this day.