You are here: HomenextPeoplenextPennicks of Delgany-the story of a famous nursery in Delgany in the early 19th century 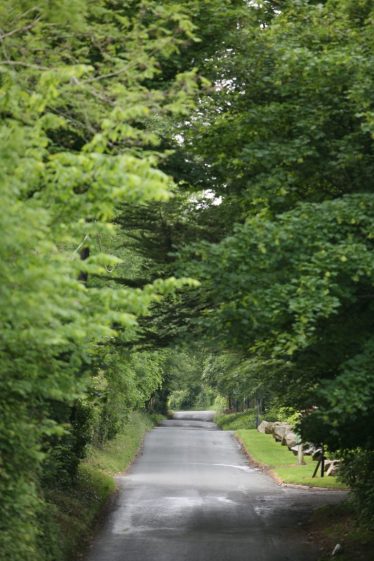 This is an excerpt from an article that was published in the Irish Garden magazine in February 2017. a copy of the full article-which has a lot more detail on the types of trees, shrubs and fruits produced by Pennicks -is attached here.

Just outside the village of Delgany heading up Bellevue Hill a road skirts a high wall that once marked the edge of a major demesne, the La Touche family’s Bellevue. On the opposite side of the road, part way along, there is an area marked on old Ordinance Survey maps as “Nursery”. This was the site of a horticultural enterprise that operated for more than a century and which, although long-gone, has left behind a legacy of mature trees.

The Origins of the Nursery

Little is known about the origins of the nursery. Mr. Michael Pennick had been head gardener at Bellevue for the La Touche family in the late 1700s. The connection between the La Touche family and the Pennicks continued into the following century when Michael Pennick or perhaps his son started the nursery. An undated catalogue of Pennick and Co. Delgany, probably from the late 19th century, states that the nursery was established in 1820 and it is shown in about 1840 on the first Ordinance sheet , when it was divided into three field units with buildings on the eastern side. The Griffith Valuation of 1852 records that Michael Pennick was then renting some six acres of land to the value of £20 and 46 acres of land with offices and house to the value of £65 at Kindelstown Upper, Delgany from Peter La Touche. A notice of probate in the Freemans Journal in May 1871 records that Michael Peter Pennick died in December 1870.

According to the afore-mentioned undated catalogue the nursery was located 1.5 miles from Greystones railway station on the Dublin Wicklow and Wexford line (important when many orders were despatched by rail) and 17 miles south of Dublin at an elevation of 400 feet. A notice appeared in the Freemans Journal in 1872: “Upper Kindelstown Nurseries Delgany, Co. Wicklow..”The stock of forest trees, evergreens, Coniferae, Rhosadendrons is unrivalled for health, beauty and variety”. Old catalogues held in the library in the National Botanical Gardens provide more information. By this time Mr Thomas Chalmers, late of the nursery firm Dicksons , was manager. From the early 1900s the name Ireton Pennick Jones was associated with the company. Census returns for 1911 record that Jones was 37, his wife Ethel Jones was 37 and they had two daughters. His occupation was given as auctioneer. An extract in a local directory of 1910 provides a later snapshot of Pennick and Co. They then described themselves as nurserymen, landscape gardeners, forest planters and valuers and contactable by telephone at 1 Greystones and by telegram to Pennick Delgany. The earlier catalogues listed the names and prices of a wide range of trees and shrubs, roses, alpines and herbaceous plants. Later catalogues ran to over 100 pages, were illustrated and provided concise descriptions of trees and shrubs.

Over the years Pennicks supplied many gardens locally, across Ireland and also in the UK with unusual trees and shrubs. After the nursery closed the site appears to have remained little used until the last decade of the twentieth century when part of it, at least,  was built upon. Kendalstown Rise follows the south-east side of the former nursery, lined with houses in extensive grounds. A number of noble trees remain among the modern lawns, flower-beds, trees an shrubs. The Pennick name has not been forgotten locally.

Mary Forest writing in The Irish Garden magazine in February 2017