You are here: HomenextPlacesnextCarmelite Monastery Delgany 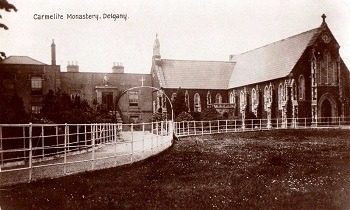 The Carmelite Monastery has been an integral part of the parish of Delgany for over 173 years. The Carmelite nuns were invited to Delgany in 1844 at the request of the parish priest of Kilquade. The central section of the monastery was originally a country house-build circa 1810. The Carmelites took possession of the house in 1844 and added the church in 1853. The first group of six nuns arrived from Warrenmount, Dublin on 7th December of that year. The building of the Monastery Church was delayed by the Famine with the foundation stone laid in 1851 and the first Mass celebrated in 1853. The Church has been described as “a little gem of Gothic architecture”.

The nuns ran a National School here from 1846 until 1896. In 2005/6 the old school building was demolished and a new extension was added to the monastery complex. In recent times, due to diminishing numbers in the Order, the Carmelite Sisters decided to sell the monastery and move the small remaining congregation to a Carmelite monastery in Stillorgan Co. Dublin.The bishop instructed that the church be deconsecrated and religious artefacts be removed before the property was vacated.Sadly, the final Mass in the church was celebrated in February 2019.