You are here: HomenextPlacesnextThe Glen of The Downs

The Glen of The Downs 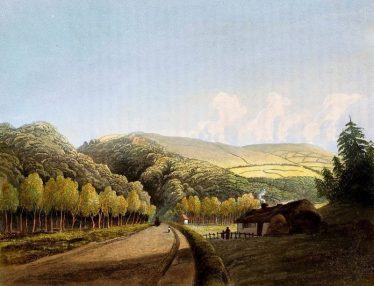 The Glen of the Downs is a 2km long wooded glacial valley with steep sides rising to almost 250m. It contains a designated Nature Reserve as well as a Special Area of Conservation. The valley was formed by the meltwater from a massive ice sheet. The rocks forming the sides of the valley are of the same quartzite as the two Sugarloaf hills. The Three Trouts river, which runs through Delgany, flows from the southern end of the glen before entering the sea at Greystones. The Glen lies south of Kilmacanogue with Delgany to the East, between the Glen and the coast.  From the northern end of the Glen both the Great sugarloaf and Little Sugarloaf are visible.

The Glen has been written about since Victorian times with the view from the nearby Bellevue described as ‘a scene of luxurious softness, combined with grandeur and significance’. Bellevue house was the home of the La Touche family who settled in Ireland as Huguenot refugees. Originally from England, their name derives from the La Touche commune in France. Read more about Bellevue House here.

Dr Oliver Rackham of Cambridge University, one of the most authoritative experts on nature conservation, trees and woodland in Britain and Ireland, and the historical ecologist who originated the international definition of ancient woodland, considers the Glen of the Downs to be such woodland and perhaps the most important woodland existing in Ireland. In his 1987 work Rackham mentions that though there is very little ancient woodland left in this country, he believes the Glen of the Downs is the most certain example. Ancient woodland is unplanted woodland that is ecologically connected to the wildwood and is now universally recognised as the most valuable habitat for nature conservation in Britain and Ireland. This is because such woodland contains, of all habitats, the greatest abundance and biodiversity of species, many of which, as in the Glen of the Downs, are rare and threatened.